At around age 50, I began to get re-acquainted with riding a bike. It was something I hadn’t done much since I was a kid, though like lots of kids, my brother and I went everywhere on our bikes. We Loved it. By the time I picked up riding again, I’d been lifting weights—powerlifting and mostly bodybuilding, for 34 years. During that time, I often did other fitness stuff or sports, too, just for fun or variety. My wife Marsha and I started riding bikes casually, then I got a mountain bike and rode that for a couple of years along with my bodybuilding. We watched the Tour de France, so of course after that I had to get a road bike and got into serious riding. I couldn’t help it. It was addictive.

I cobbled together an informal training program, half the year I concentrated on cycling while the other half I concentrated on bodybuilding. Not your usual mix of sports, I know. Though I originally resisted the urge to consider any kind of competing, having had enough of that in the weight sports, again, I couldn’t help it. After five years I entered a master’s (age division) time trial.

I assumed I was going to get shellacked and I did. After all, there were a lot of cyclists and racers out on the roads where I trained, so I knew they were going by me. They were faster and better than me. I got that. I knew there were elite national contenders at all the area races. I began racing with humility, hardly anything else. There are no easy races. So why race?

The excitement. The challenge. The test of yourself. No miracles, though; my first race I finished last. Not just in my group, but out of all ages, divisions and varieties of cyclists. My wife was worried I’d be discouraged. Hardly. I was excited. Thrilled. I did the 20 plus kilometers of rolling hills in 43:01, at the un-blazing average speed of 17.6 mph. As far back as I finished (I could be no farther, right?) I actually went faster than I thought I would.

I remembered my first weight training workout when I was 16, where I lifted only a 20 pound bar at a bodyweight of 132 and a height of 5’11. Six years later I placed second in a powerlifting meet, tying for the highest deadlift. As a natural bodybuilder, eventually I built up to over 200 pounds in lean condition at my full height of 6-1. So starting out behind didn’t discourage me at all; I expected it. It’s the nature of things.

After that first race, I changed my training to go with what my intuition and experience told me: do more intensity and work harder. The long, slow distance thing that I’d done far too much of was not only retarding my progress, I think it was making me slower. By the end of the first season, I made the podium, finishing second in a time trial--admittedly a very distant second, but I’d come a long way already.

I trained that off-season with a single purpose, to get faster. Marsha bought me Graeme Obree’s sensational book, “The Obree Way,” which details the radical training methods of the famed hour world record holder. I trained hard indoors that winter (we live in Ohio) on the turbo trainer and in the 2013 racing season improved my times and speeds to 38:20 (just under 20 mph average) and medaled in three of five races in the tough TT series. I was the unexpected winner of the season championship on points, due to my second and third place finishes. Other riders were still better and faster, but I was the champion. It shows what can happen with some work, some luck, and a lot of passion.

Many cyclists have commented on my dramatic increase in speed. When asked how I did it, I freely explain my methods, which many dismiss. (This reminds me somehow of the response I often get when I advance my unconventional natural bodybuilding methods.) Yet some have said they rode a five-hour ride the day before our time trials. Why, I thought, ride a five-hour ride for a 30 to 40 minute race? That certainly wouldn’t work for me.

Many serious cyclists and racers still do enormous amounts of long, slow/steady distance. There’s a place for that, particularly if you are training for events of 6 to 10 hours. Yet all races are won not by distance but by speed. Every one of them. The fastest rider gets the prize, whether you are racing the 1 kilometer pursuit on the track or 6 hour climb up the Alps. Distance is a prerequisite, yes, so you have to have that endurance. But whatever the distance, you have to have the speed. So to develop that, you must include that intensity and effort to achieve and sustain that speed, somewhere in your training.

As far as whether you might want to race, I go back to passion. Passion. Enjoyment. Racing is a frenzy; it demands more of you than you’d give on your own. But passion--that will propel you along whatever adventure you undertake. It’s great to do well in a race, to get on the podium, and to win a medal or a championship is a thrill. But the greatest thing is literally, with the bike, enjoying the ride. Or the race.

I encourage anyone to pick a fitness activity or a sport and go for it. You don’t have to compete, though the ultimate competition is always with yourself, your limits. You can get better. Everything won’t always go well, but the effort will be worth it and you’ll likely get a great measure of satisfaction and enjoyment, because whatever you choose to do, you can do it. 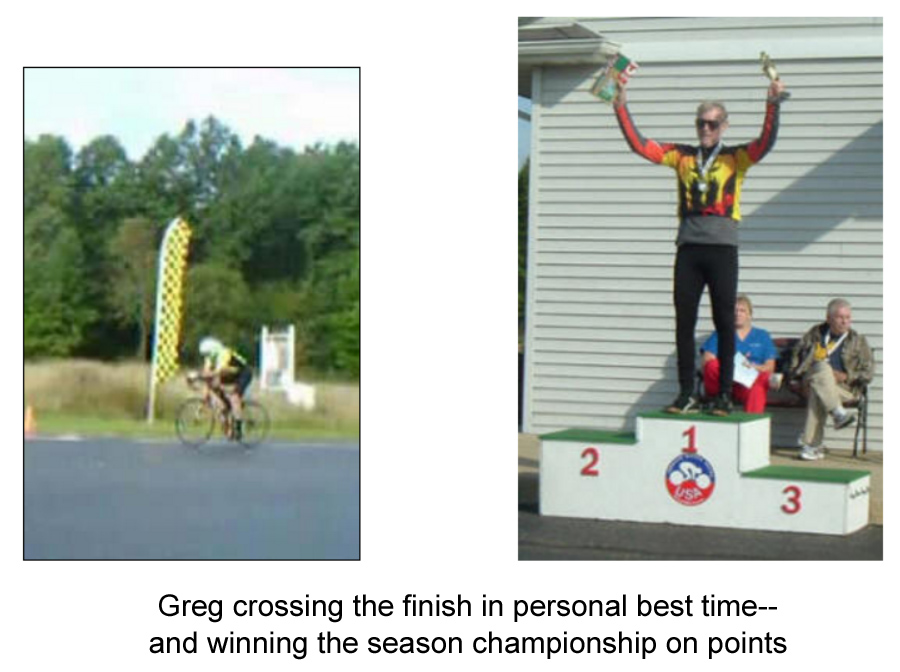