Graeme Obree said it was the first piece of equipment he’d rescue from a fire. He was talking about his turbo, his stationary trainer.

Why, you ask, would he feel that way about a fairly simple mechanical bike stand, a piece of cycling equipment that is often overlooked, considered outmoded, or outright hated by riders?

What Obree is talking about is setting your bike up as your static turbo trainer on a stationary stand and pedaling to nowhere. Nowhere, except in his case, to the World Hour Record.

Obree, for many who are unfamiliar with him and his achievements, is one of the greatest cycling stories in the history of the sport. Arguably a cycling outsider—although he did come up through the British club and track ranks—he trained himself in his own way to become a champion pursuiter, time trialist, and in the culmination of his cycling career, the Hour World Record holder.

And his turbo—a simple, magnetic resistance stationary trainer, was at the center of this.

Once Obree dedicated himself to speed and sustained speed training, which he maintains rather than endless endurance is the key to all cycling performance, he set about on his legendary turbo training sessions.

Without giving away Obree’s training methods (his book does this ), Obree felt that the 20 or 30 minute all-out pacing session, a turbo time trial on the mag trainer, was the key to developing ultimate sustained speed. Obree, meticulous in all things, saw the turbo as his “laboratory tool” in his personal experiment to make himself a time trial champion. He set up the turbo and bike so that it was always the same resistance and positioning, so that it would accurately reflect his performance from one ride to another. Then he could take that speed out on the road and to races, so he knew exactly what he was getting from the training.

He aimed for small improvements each time he rode the turbo, which was only once every several days in his training cycle, so that he could have an apples-to-apples, or turbo-to-turbo measure of performance, and hopefully, improvement. On other days he would do his other rides, including outdoor recovery rides and some distance (again, his schedule is in his book), but he made it absolutely clear that the turbo ride was the key to improvement.

Most riders don’t relate well at all to Obree or his methods. And most don’t follow him or anything like his methods. Obree, apart from being a unique and at times controversial character, was and is a radical thinker. He examined all the more than century old cycling training tradition and lore which tells us endless miles somehow build speed, rejected this tradition, and pursued the path of training with an emphasis on developing world class speed his own way. And did he ever.

Add to this that most riders, even racers, don’t understand how the turbo can help them, let alone that it is, in Obree’s view, an essential part of training, and you see that turbo training is for outliers. Even many highly accomplished racers as well as many talented performance riders do anything to avoid the turbo. They’ll ride outside in the winter at five miles an hour wearing six layers of shirts and a fluffy coat before they’d park themselves in their basement, garage, or a spare room and submit to the demands of their trainer. This is even in Ohio, where we have two seasons of weather: bad and not so bad. Our winters are arguably six months, from a riding standpoint, yet the most many riders will do in the winter is spin the turbo lightly, occasionally, for “base miles.” I know, I was once one of these riders.

But the turbo, the simple mag resistance unit, a no frills machine as Obree points out, can produce massive improvement in most cyclists. It is even useful in the summer, for an occasional sharpening session for both speed and sustained speed. Obree used his year round.

So many cyclists are concerned with the bells and whistles of trainers. They want lateral movement, technical features so they can watch DVDs, devices to measure power, or prefer fluid trainers or other types. Although any turbo can be useful, Obree insists on a mag trainer.

Yeah, a mag trainer is basic, almost crude. That’s what you want. You want to get the largest amount of resistance you can and get to work.

Think of this: cycling fast is about, at its root, spinning the cranks faster usually in a lighter gear or turning a large resistance which due to its difficulty turns slower (i.e., a big gear on the road, or in this case on the turbo a large amount of magnetic resistance.) Better yet, if you can spin a big gear or a large resistance fast, then you have the ticket to elite cyclist territory. Of course we’re breaking down the act of riding here to its most elemental aspects, but you get the idea. You want to go fast.

The turbo can help you go faster.

Obree feels that this relatively short but very difficult 20 to 30 minute training ride at an all-out pace is the key to developing sustained speed across most of the disciplines and distances that cyclists commonly ride. It is at most very specific for time trialists. He goes into greater detail in his book and readers can see this for themselves. But suffice it to say that working each session on the turbo, whether it’s once every four or five days, once a week, or however often a cyclist trains this high-intensity lab-like time trial, it is potent and productive for developing needed speed. For track riders and time trialists, I would think the turbo is an absolute gift. And a must.

Switching from Obree’s approach for a moment, the turbo can be useful for other approaches. If you are a long-distance road racer, you can put in many miles in the winter or in bad weather on the turbo. You can do high-intensity intervals.  A few triathletes now do most of their training, which involves considerable distance (i.e., duration) on their turbos. Yes, it can be difficult, but it’s all about increasing your cycling performance.

Again, in most climates, the turbo is an essential winter tool. It’s amazing to me how many serious riders and racers take most of the winter away from the bike, or train only very lightly. All I can say is I would barely be able to ride if I did that, and I certainly couldn’t race.

You can’t afford to throw away half the year by not riding or only doing light training. At least I know I can’t. The turbo remedies this.

I admit I used to hate riding inside and rarely rode the turbo, just occasionally spinning very light resistance in the winter. After my first season of racing, though, I began to take the turbo seriously.  My wife got me Obree’s book, which I absorbed then immediately got to work on my mag resistance turbo improving my speed and sustained speed. My improvement that “indoor season” –not off-season, was dramatic. I would say overall 50% of my speed improvement since has been from the turbo. You can argue that, say it’s unscientific, unmeasurable—fine, but I know the turbo’s been a big part of increasing my racing speed.

But it’s not just Obree with his unique take on the classic 20 to 30 minute time trial. Other greats, such as Chris Boardman, Chris Hoy, and even the incomparable Eddy Merckx trained hard with the turbo to develop massive speed.

But this isn’t so much about Obree and it’s only barely about me. It’s really about you, and what you can do on the turbo. You can work harder on the turbo than you can on the road—that’s the real secret—that you can do something harder than even your regular road riding and training and keep getting faster. Turbo training can become major overload training. So get on your turbo and get faster today! 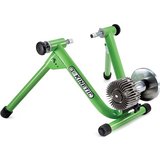